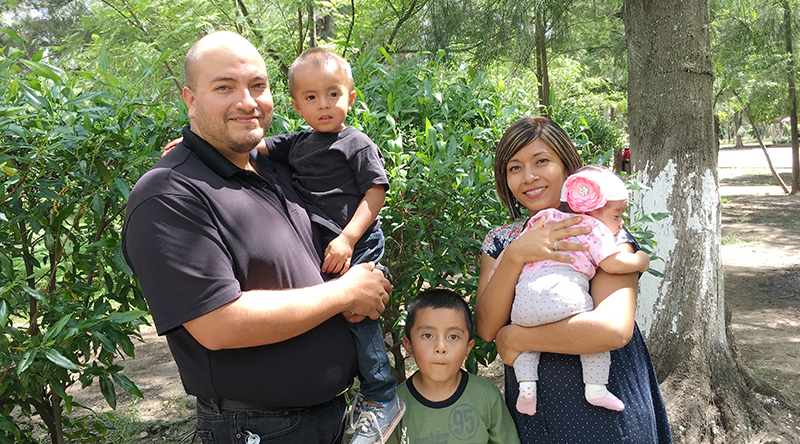 My name is Diego Gutiérrez,  happily married to Luz Elena for the past nine years. We are parents to three children.

I am originally from Mexico City, where I grew up and where I first heard about God when I was twelve years old.  Sadly the church where we attended closed its doors because the pastor went to the United States and no one took his place.  That’s why I went through my teen years apart from God.

I studied to become a computer technician, and at the age of twenty I got the opportunity to move to the state of Baja California, where God had many things prepared for me including a job to prepare me for my future ministry, a re-encounter with God, a healthy church connected with a seminary in order for me to be prepared for the pastorate, and a lovely wife.

After arriving in Ensenada, Baja California, I heard about a federal government position at a radio station dedicated to relaying information to the indigenous communities in their own respective mother tongues.  I competed for the position with more than twenty people, and I was chosen due to my computer knowledge and experience in technical support since the job included maintaining the computer equipment at the radio station—which at that time wasn’t much, I’m talking back in the year 2005. But as time passed, I needed to become involved in other activities at the radio station such as speaking on the radio and making audio recordings.  In this way I was acquiring skills and experience, little by little, until eventually I was in charge of production. God was equipping me [for future ministry] in great ways that I could not even imagine.

While working at the radio station I remember one key moment.  Among all the indigenous speakers, there was one from the ethnic group Triqui of Copala, and on that occasion a big white guy, clearly from some other country, came to find this man from Copala. To my surprise, they began to converse in the Triqui language.  I couldn’t understand what was going on, how that man could speak the same language as my coworker, originally from Oaxaca. In time I came to learn more details about this brother in the Lord—Allan Lee was a missionary linguist who worked in that area of Baja California.

During those same five years that I worked at the radio station, I re-dedicated my life to the Lord, attended a Free Methodist church, and began my preparation at seminary to serve God as a pastor.  I also met the woman who would become my wife while she was also preparing to serve God, and in the year 2010, we were married. Among our wedding guests was Allan Lee who came to wish us well, but who also made a suggestion:  “Why not serve God in Oaxaca where there is a need for a recording technician with a ministry that records audio Scriptures?” My wife and I were not sure, since our calling was to pastor a church, but we made it a matter for prayer and we opened our ears to listen for the voice of God.

We had two separate opportunities to go pastor a church, but the doors to both were closed to us for different reasons, and then God reminded us, “Why not serve in Oaxaca?” and we said, “Here we are.  Send us.”

It was February of 2011 when we arrived in Mitla, Oaxaca, only six months after getting married. At first we thought that only I would help out in the recording ministry and my wife would be at home awaiting my return from the village recording trips, but there were many recording projects and few personnel, so my wife quickly learned to record, edit, and she quickly became my double help-meet and teammate.  So we served God together, full-time for two years, going here and there, from project to project, experiencing new things and getting to know the whole state of Oaxaca. Despite the fact that my wife’s parents are from Oaxaca, she had never lived in Oaxaca, having been born in Baja California. Those were two incredible years of varied experiences and learning about other cultures, other foods, other languages, and a big number of etceteras.

There were good and bad experiences during the projects.  For example, in one village people broke into our car and stole several things from us; in another town, I was mistaken to be the new town priest they were expecting; and in a third village, the food they gave us was always a very hot, spicy soup. We had many interesting experiences and remember them fondly.

We were serving God with joy and made a good team. We also had plans to start a family, and in 2013, God blessed us with our firstborn, a son. Almost at the same time, our call to the pastorate was very strong and the spiritual need in Mitla was still great, although various strong churches were already there.  So in that same year we planted [a new congregation], a Free Methodist Church as a mission of our mother church back in Baja California.

Since that date I have continued to support the recording studio part-time, and I have seen great things that God has done through this beautiful recording ministry during the past eight years.  Though it’s no longer possible for us to travel like before since we now have a family to care for, as well as the church we are pastoring, we still always try to help out as much as possible with the ministry that brought us to Oaxaca.

We really appreciate the prayers, especially now that we are beginning a new [outreach] work here close to Mitla, and we ask that you pray that the people of Xaaga open their hearts to the gospel, and that the Word of God continue spreading in the mother tongue of many places where people need to know our Lord Jesus Christ as their personal Savior.