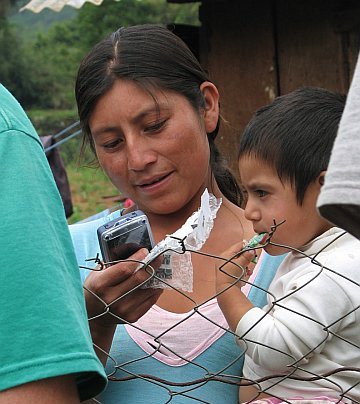 “Man of peace” * is the term we use for our strategic contact in any language group. Before producing audio Bibles, we need at least one person who knows how to read and who is well respected as he introduces us to the community. Without his help, it would be nearly impossible to complete the task of translating, recording, or distributing God’s Word in the language of the people.

Barcimeo was that person of peace in (the) Amuzgo group. Able to read his language well, he introduced us to several others who were willing to assist in the recording of the New Testament. Barci and two other men rode a bus for fourteen hours to our studio in Mitla, spending the next four weeks away from their families, working twelve or more hours per day until the recording was completed. Today, many families are listening to God’s Word and being transformed because of Barcimeo’s dedication.

In the Mixe language group our “person of peace” was Maria. She helped us to record the New Testament and dub the Jesus movie into her language. Among the 20,000 people who spoke the language, Maria was the only person who was able to read and who was willing to help us. She invested many hours to make sure that the New Testament was translated and recorded well so that her people could have the Word of God in their Mixe language.

Juan is a humble Chinantec believer I met soon after moving to Oaxaca, Mexico in 1995. He, like the other “men of peace,” had a God-given dedication to the cause at hand. Before roads were constructed in that part of the state, Juan and his family hiked long hours -sometimes without food or drink- bringing the gospel, planting and pastoring several churches, and later becoming a leader in his denomination.

Juan learned how to read as a young man, sitting and translating the New Testament into his Chinantec language. He was anxious to convert the finished translation to audio, knowing that most of his people would never learn how to read. Juan worked long hours until the task was finished and the New Testament was available to his people. Over the years, his churches have grown and many have come to faith because of Juan’s efforts and his gentle spirit. God has used him greatly among the Chinantec people.

I thank God for Barcimeo, Maria, and Juan. They are true gifts to our ministry who have allowed us the privilege of bringing God’s Word to countless thousands of people. Please pray for “men of peace” in every group where we minister.

As I write these words, I am saddened after a visit to Juan’s home in Oaxaca earlier today. After fighting many adversities in his life, Juan is now losing his battle with bone cancer. Pray for Juan, his wife, two married daughters, and the many Chinantecs who have come to faith because Juan was faithful to his calling.