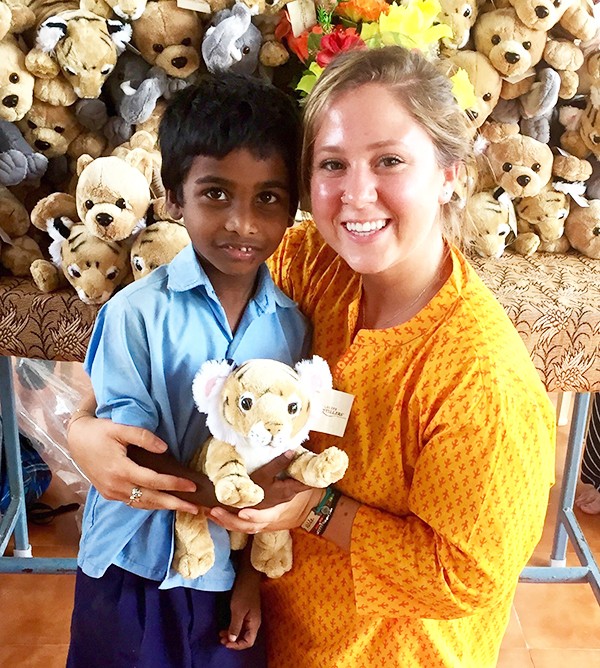 In India we have worked with oral communities, non-literate people groups, the visually impaired, people who suffer from the stigma of leprosy, etc. This summer, we were thrilled to add a new demographic to this incredible saga of God’s good work through WCOI. We now have some great resources for ministering to children! More specifically, we work now with young people who are orphaned, destitute, or have been rescued from the terrible world of human trafficking.
Two groups from the USA participated in distributions in three different orphanages on their visits to India. We got to meet children who come from traumatic family backgrounds and who have never owned their own stuffed animal. To be able to give a child a cuddle toy to snuggle up to at night was precious in itself, but to know that inside each of these animals was a solar-powered device that told stories of God’s Love was absolutely priceless.
The look on the kids’ faces told the story. I wish I could describe to you what we experienced those days, but my words seem incredibly inadequate. I’m going to use the words of my intern Maggie Losey to describe that day instead:

“There are no words to formulate a sentence about what I was feeling as I took off my shoes and carried a bag of animals into the hall. All of the glistening and eager eyes were on me, smiles were barely contained as they were overjoyed to be receiving a Bible and stuffed animal. There were nine chairs that lined the front of the room prepared for us to sit in, we were their honored guests. JP and his father both spoke to the children as their little eyes were only fixed on JP and the storyteller that was in his hands. Working alongside JP this summer, learning his story, and then being able to distribute the first of its kind [the Wildlife Storyteller] alongside him was unreal in itself. But to see the passion in his eyes and enthusiasm in his heart was inspiring. After his talk about the Storyteller and how to use it, the animals started to make their way out of bags and the readers were placed inside their stomach pouch.
All of the children sat up straight, some had their hands over their mouths as to not let out a squeal of excitement, and others held hands to swing in the air waiting for the moment they would get their perfect animal. Two things make this distribution so special: first, for most of these children this is the only stuffed animal they have or will ever receive. Secondly, as stated before, this is the first distribution of its kind. WCOI traditionally distributes to the blind, the illiterate, distant tribes, and to the leper villages. Never have they distributed directly to kids until this year and to be able to be a part of this distribution made the whole trip to India worth while.
Before the children became impatient the distribution started. One of us was in front of a table that was filled with animals, on our knees, welcoming kids with open arms, smiles, hugs, and a Wildlife Storyteller of their very own. Every single one of them was able to come up to the front and individually receive this gift, which is unheard of for WCOI. Usually they run out of audio Bibles, but with the combination of preparedness by our team and some absences among the children all of them were able to feel loved and special.
There was pure joy that filled the air. The kind of joy that is thick with the love for Jesus. The kind of joy that brings tears to your eyes. The kind of joy that can only be found through Jesus Christ. After all of the animals were distributed we were able to mingle among them and help them figure out how to play the Storyteller, be silly with the younger ones, and love on the older ones who have gone through much more abandonment than most people. It is through these Storytellers that we hope they will come to know Jesus and learn that He has not abandoned them; He is there always and forever with loving and open arms.
Watching my team make quick connections with the kids, watching JP and his father flash their teeth with their signature smile, watching the excitement of everyone in the room brought tears to my eyes. I have been beyond blessed to be able to serve the Lord and witness this miracle of sorts happen. God is so very mysterious, filled with so many plans for all of us that we will never be able to begin to imagine what they are. At the end of the distribution, JP’s father -Uncle as we called him- prayed and blessed the children. It was a powerful moment as all the children were holding up their animals to receive the prayer.”

Will you join us in helping provide more of these reminders of God’s love to people in India? Thank you for being a part of this journey with us! We are blessed by you!