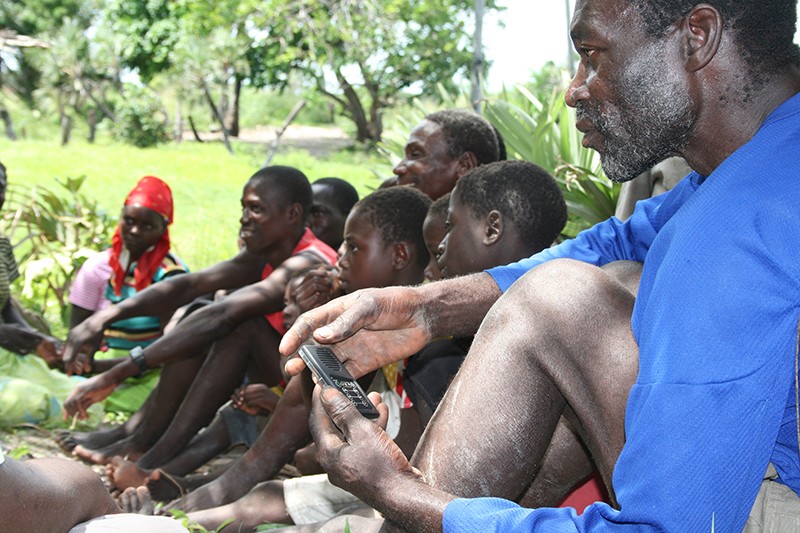 In April our staff in Mozambique organized an audio Bible distribution in the village of Matchelene in the southern province of Gaza, Mozambique. Matchelene was selected in 2014 as one of our focus areas for distribution of the Tsonga New Testament. Focus areas were determined in order to ascertain the effectiveness of a relatively large saturation of audio Bibles being distributed in a particular location. During the past year, five distributions have taken place in Matchelene, and we have had numerous opportunities to follow up in the area.

I recently had the privilege of sharing from God’s Word during a Sunday morning Scripture distribution. I had chosen several passages from the New Testament. As the first of these passages was read from the Tsonga Bible, I was watching the congregation and noticed there were three older women without Bibles who were saying the verse along with the person reading. I thought “Wow, those women have the verse memorized.” As the second scripture passage was read, the same thing happened. I studied the women as they recited the words with joy written all over their faces. I recognized one of them from a previous distribution. I remembered how she shared that she had previously been scared to talk to her friends and family about God because she was illiterate and did not know the Scriptures well. Now, a year later, the same woman was able to recite all four of the passages that were read. After the service I asked the pastor about what I had seen and he shared that many people in the church have listened to their audio Bibles so much they have entire books memorized. When I asked the same pastor about the impact of audio Scriptures on his congregation during the past year, he simply said “Look around us. Don’t you see how many more people are here today than the first time you came?!”

God’s Word has taken root in Matchelene! The evidence is etched in the joyful faces of those who have received His Word in their heart language.