The month of October is associated with a myriad of things, from pumpkins and apples to stockings and sweaters. But did you know October is also Blindness Awareness Month?

Ely shares, “We have a campaign, the Ron Beery Memorial Fund, which is basically dedicated to having audio Bibles sent. One hundred percent of the funds go towards audio Bibles. So we’re raising money for that campaign, and though it’s not directly focused on just reaching the Blind, the Blind are a large population we do reach as a ministry.”

The need for audio Bibles in India, especially for the Blind population, is great. After all, India has one of the largest populations of Blind people in the world.

ASM’s JP Sundararajan says when the ministry first started working with the Blind in India, they learned a lot about the unique needs of the Blind community.

“We were always curious about the plight of the visually impaired and the Blind in India, but I was not aware that a lot of the Blind we work with, they were not born that way. In India, oftentimes health concerns, diabetes, and a variety of other issues cause people to go blind in later stages of life, so middle age and onwards. So in some cases, people basically are able to see one day, and then they wake up the next morning unable to.”

Learning to read Braille later in life is difficult, and even if you can, the Braille Bibles are inconvenient. JP Sundararajan with ASM gives the example of the Indian Tamil Bible.

“The Tamil Braille Bible is about 40 volumes thick, and if you were to stack it, it’s about seven-feet tall. Most often, people who are unable to see are unable to read. And if, perchance, you are able to read, you probably don’t have enough money to buy the Bible. And if you qualify on both those accounts, you don’t have room to store those Bibles. So the Blind have been contacting our office in India and saying, ‘Could you do a distribution amongst us?’” 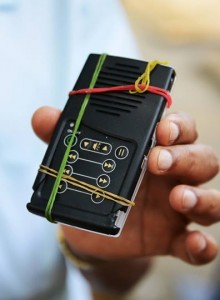 A few years ago, Sundararajan experienced his first distribution of audio Bibles to the Blind with ASM, and it was a moving experience. They traveled to a small town in southern India.

“We gathered with about 50 or 60 of our Blind brothers and sisters and it was amazing because they had their entire community. They had a praise and worship team that was completely visually impaired; they had a pastor who held this event in his church, also visually impaired.

“You would call their names out and they would stand up and then you would go and give them the Bible. And we had explicit instructions stating that as soon as you get your Bible, please don’t turn it on yet, because when you have a room full of people who cannot see you, everything you do has to be done in a choreographed fashion.”

He continues, “After everybody has gotten their audio Bibles, we invite them to take the Bibles out of their boxes…. We invite them to find the top left corner where the power button is, and we say, ‘Okay, do you find it? Now press and hold it down for three seconds until you hear a tiny little beep.’ And then this room is just dead silent. And then you hear this series of beeps just ripple through the room.”

“Then we invite them to turn their audio Bibles on. And in one fell swoop, the entire room is filled with Scripture.”

While Sundararajan’s initial distribution was on a smaller scale of 50 to 60 people, the next week ASM’s team went back to a nearby town. He says that time, around 1,500 Blind people had gathered for a chance to receive and hear God’s Word.

In addition to giving a Blind person access to Scripture, audio Bibles also represent a chance at greater independence and human dignity in their journey of faith.

Sundararajan explains, “More often than not, they do want to read Scripture. A lot of them are Christian brothers and sisters who come from churches who now cannot have access to God’s Word. So they have to invite parents or other people, inconvenience the others — or at least they feel that way — to sit next to them and read Scripture.

“When you give them God’s Word in this form, they now have access to it anytime they want and they don’t feel like they’re a burden to anyone else. So for me, it was just beautiful to see these beautiful people come.”

Click here if you’d like to give to the Ron Beery Memorial Fund with ASM! Just $35 makes sure someone, like the Blind in India, gets their personal copy of God’s Word in audio.

In addition to giving, Ely shares how believers can pray during Blindness Awareness Month:

“I think a great way that people could pray is for awareness. Since working with ASM, I’ve gotten to learn so much about oral cultures and just the storytelling that has to take place for a lot of people to even come to know the Gospel, or hearing the Gospel through an audio Bible…but also the Blind — just the people that are really on God’s heart, to be reached.”